From the discovery of the Albertus font, originating in Kennington, through to hand-printing custom invitations for the Knight's Walk Garden Party, there has been a lot of activity at No.15 connecting historical and archive conversations with printing and letterpress. Read more about these activities here

Amongst the information gathered at our Lambeth Archive Visit with residents at the Minet Library and all of the historic stories and facts that have been shared by residents at No.15, we have taken a real interest in the people and characters who used to live in and around Knight’s Walk.

We found out that Charlie Chaplin spent time in several workhouses around South London, including the Lambeth Workhouse on Renfrew Road, which is now the Cinema Museum, just a stones throw from Knight’s Walk.

We also discovered the Albertus Typeface, which is the font used in street nameplates throughout Stockwell and was designed by Berthold Wolpe in 1932. Wolpe was one of the greatest names in typography design and lived in Kennington Park Road until his death in 1989. 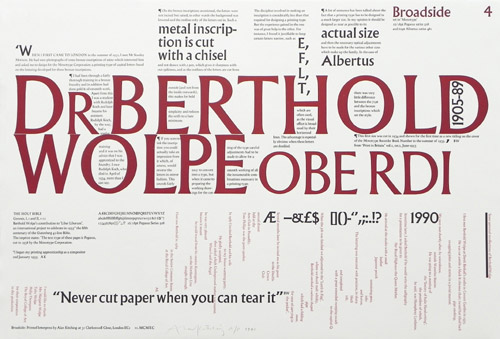 The history of this typeface and local designer sparked an interest at No.15 around printing and printing presses. After collecting so many stories and memories in the Knight’s Walk Memory Archive we wanted to find a way of turning these into printed pieces, capturing them in a common aesthetic in order to consider how they might be reflected and shared in the future.

Considering the interest and passion of some Knight’s Walk residents into analogue mechanisms and the trades and processes of the past, in March this year we introduced an Adana Letterpress to No.15, a British-made compact letterpress which was first produced in the 1920s. 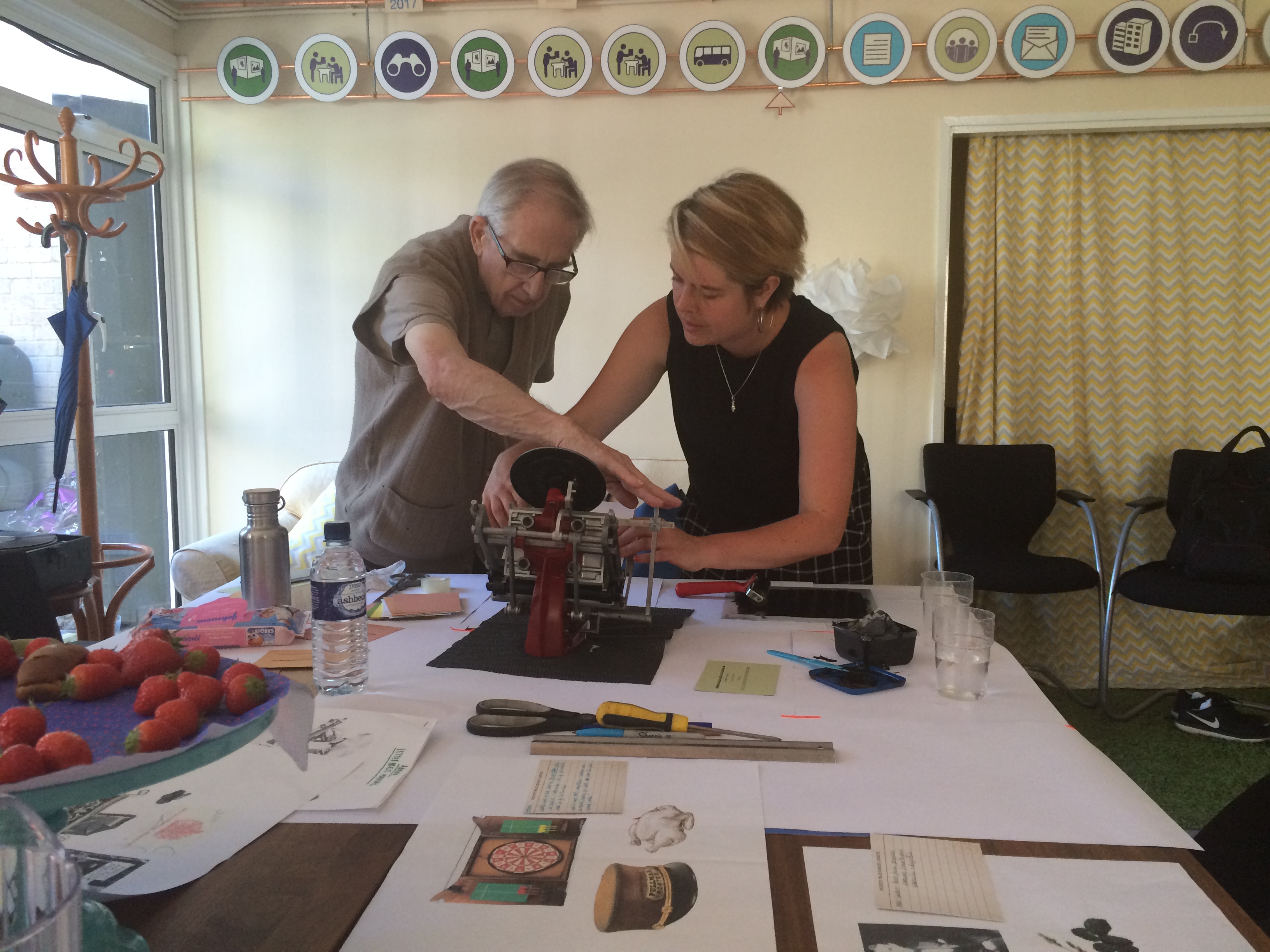 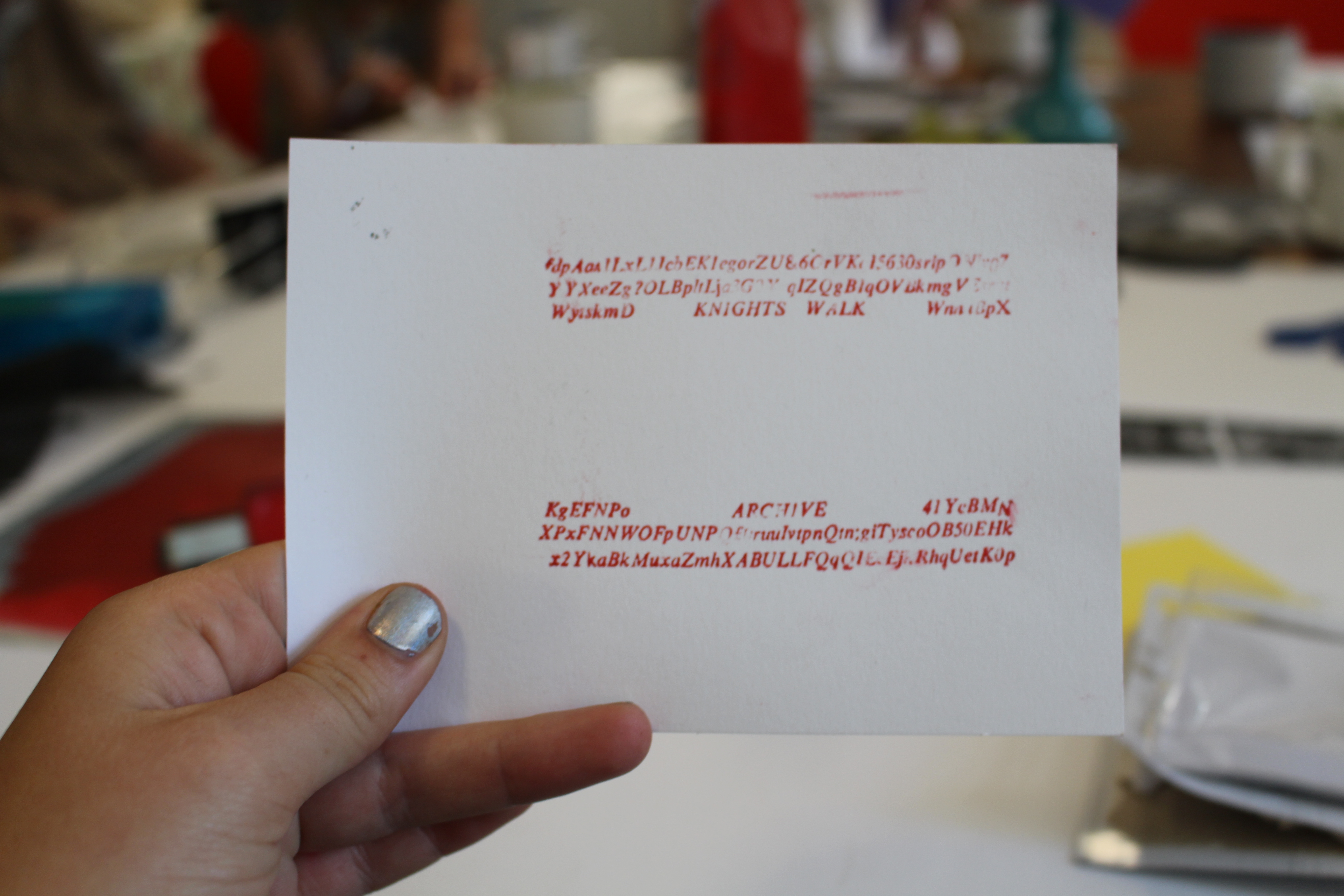 We have run various workshops with residents at coffee and cake to produce postcard sized prints in which people could write their memories or Knight's Walk anecdotes. People enjoyed getting their hands dirty and taking part, inking up the plates, working the press and disassembling the parts to find out how it all works. The result was a collection of beautiful unique prints, produced by residents of Knight’s Walk, which were used as frames for people's stories to go in the Knight's Walk Memory Archive.

Building on the interest and enthusiasm amongst residents around printing and the historical typeface, we reached out to a local design and letterpress studio Prickle Press and held a professional letterpress workshop at No.15 at the end of August. Rachel from Prickle Press  brought along her Adana Letterpress, a larger version of the one that we had been using at  No.15, along with an assortment of antique larger fonts and different inks. 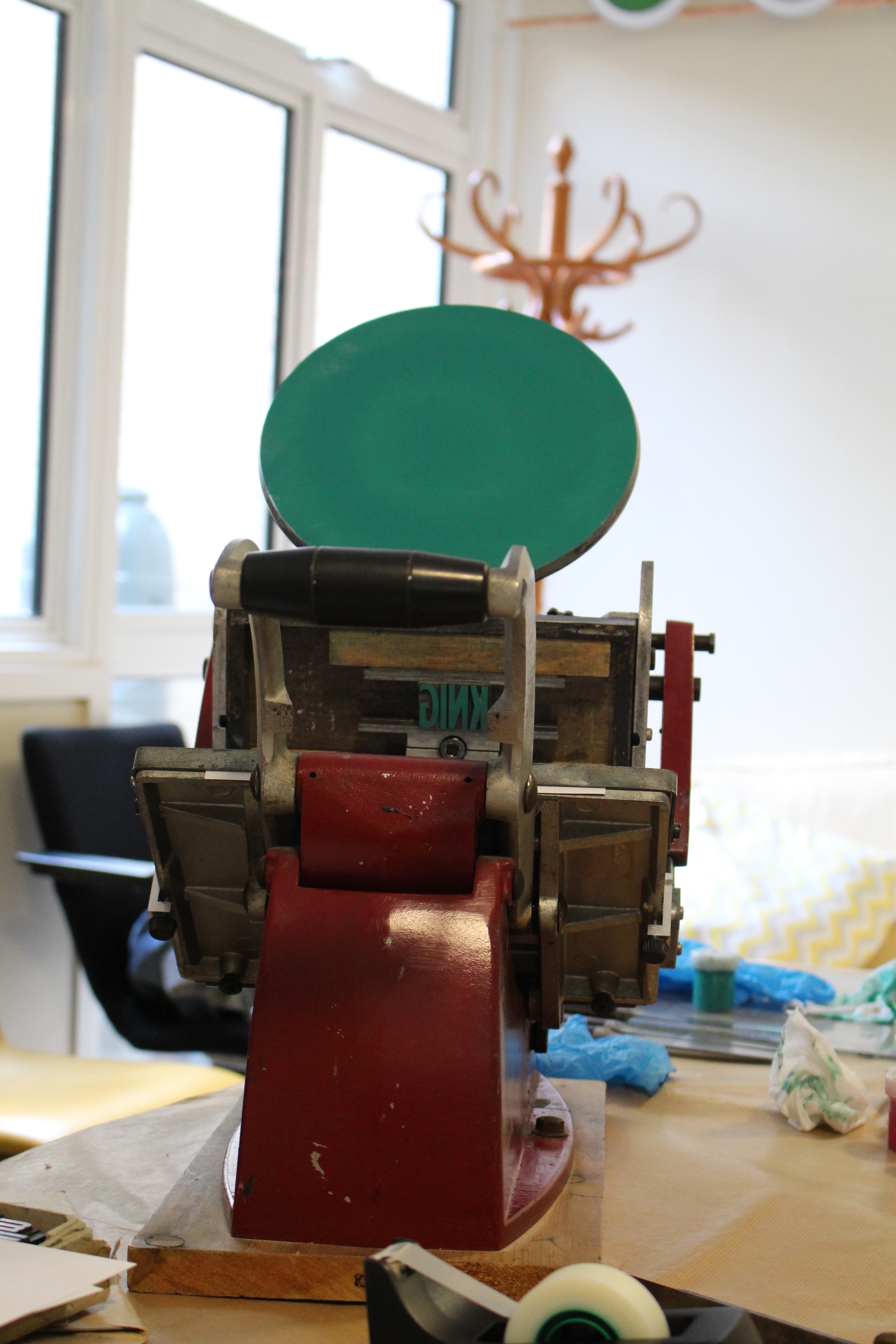 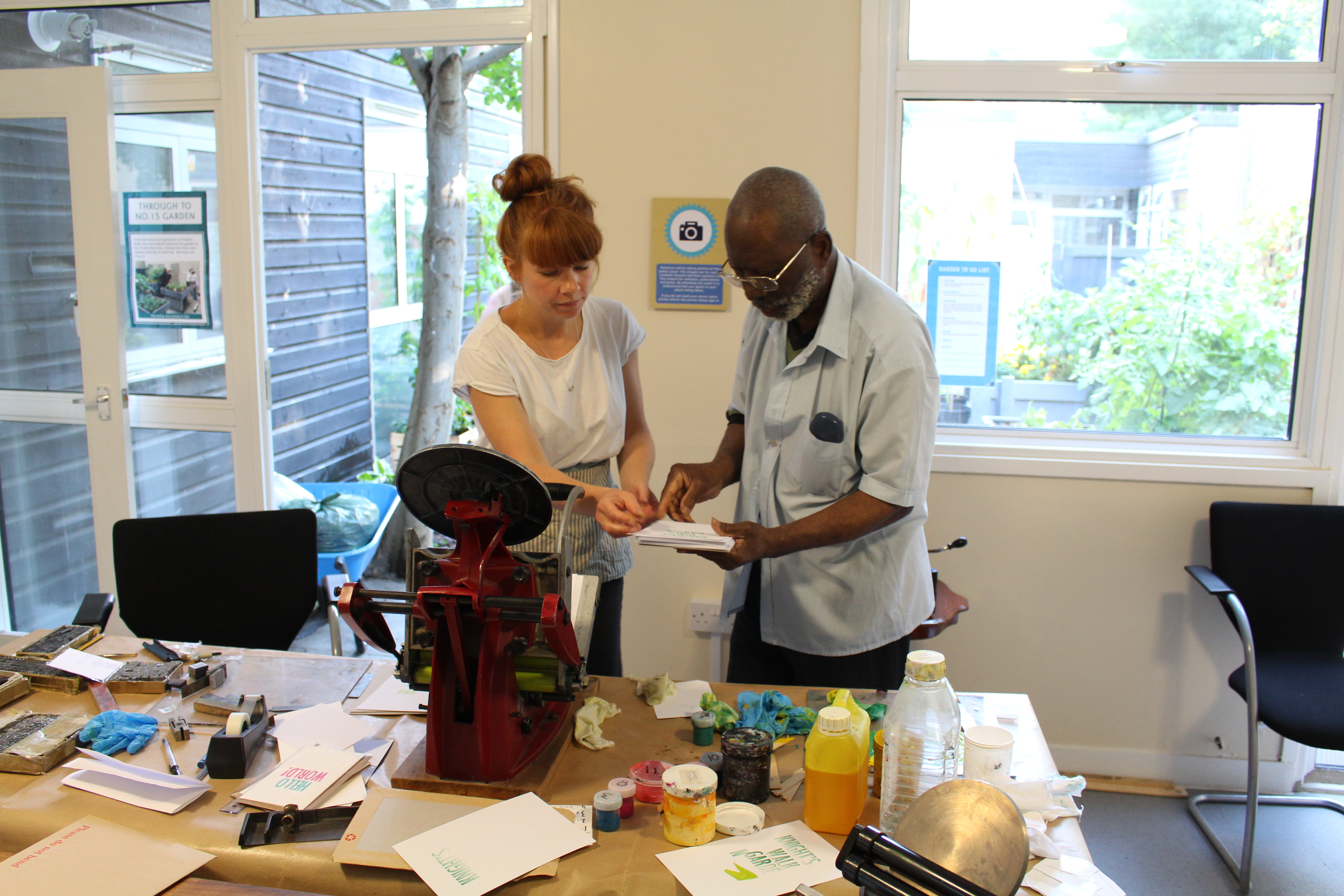 After a thorough demonstration we went about printing custom made invitations for the Knight’s Walk garden party with residents taking part in assembling the printing plates helping to press the lever to produce the prints. It was hard work to produce 33 invitations for the whole estate entirely by this manual technique, but everyone came together and took part in this mechanical process to prepare these delightful unique prints. 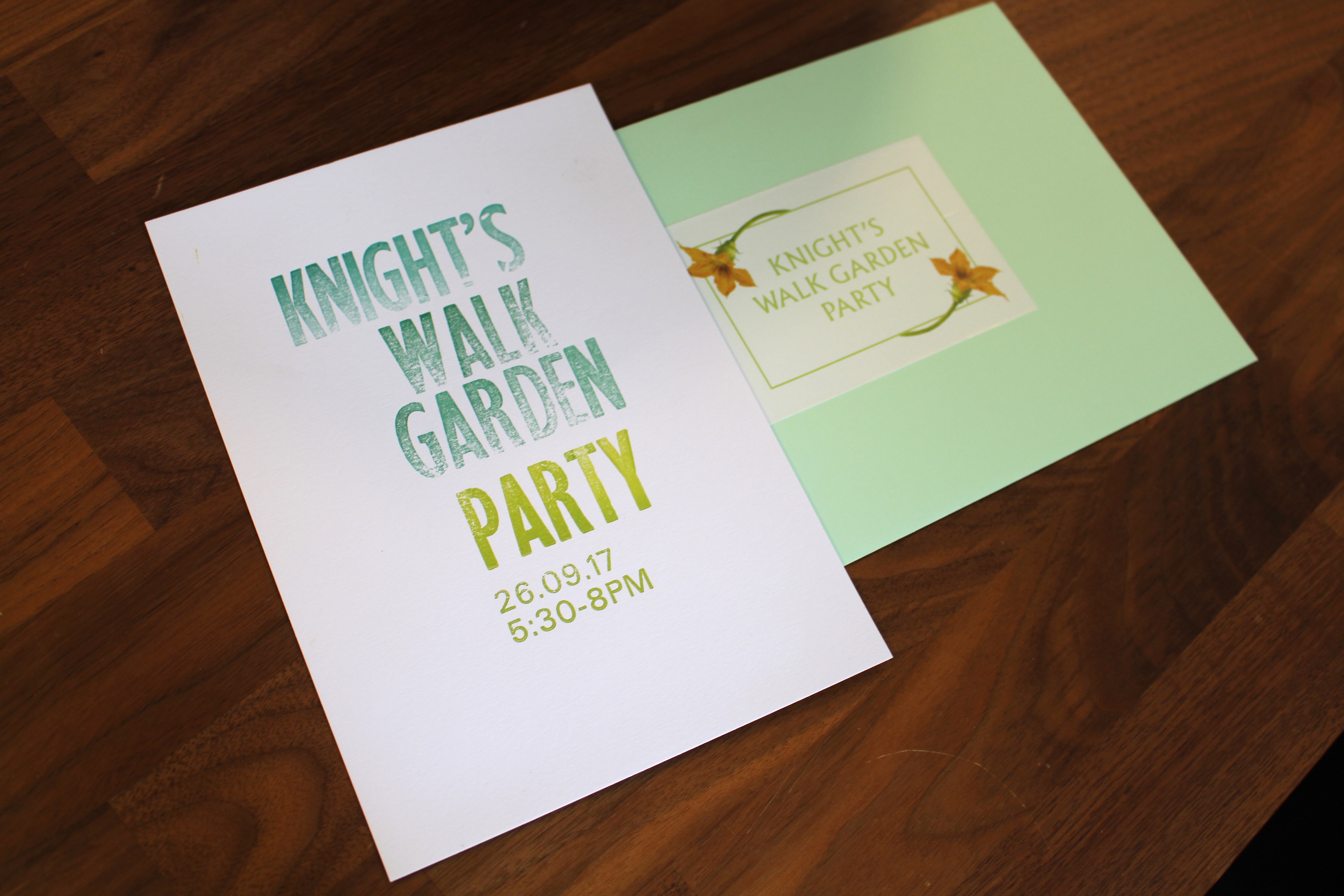